The life and times of Poppy “T” McGee

This is the story of Poppy “T” McGee, a lanky sweet-natured stray dog from La Digue who stole our hearts and became a intrinsic part of the Le Nautique family. Call it serendipity, kizmet or fate but this heart-warming story has been playing out for over 5 years now and here is her story. 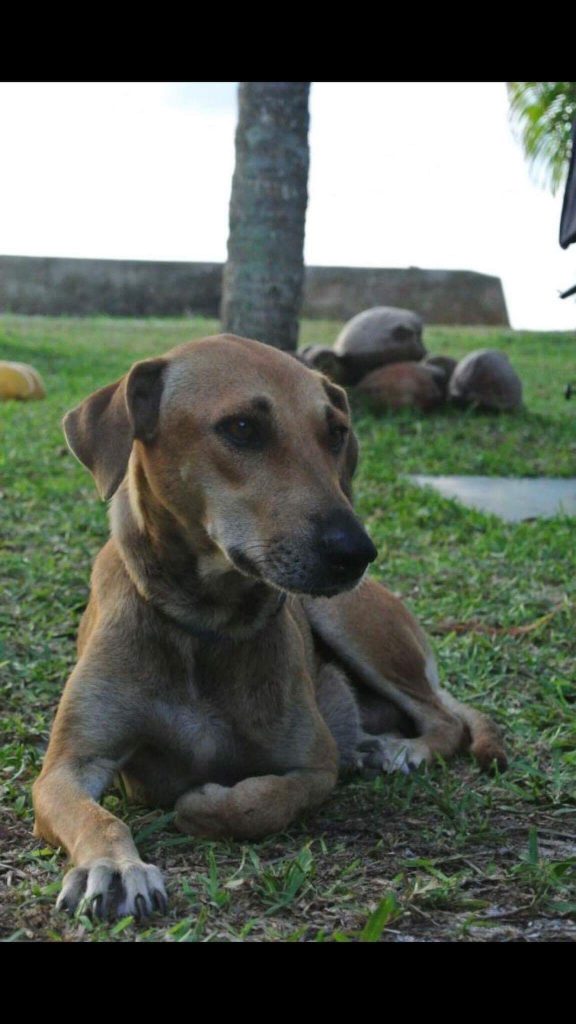 Let us take you back to March 2013 when Poppy “T” McGee first casually wandered into our lives and onto the beachfront property where Le Nautique La Digue stands today. We were not living in the Seychelles back then but were all in La Digue for Stuart and my island wedding (6th April 2013).

The days leading up to the big day were like many other destination weddings – planning, organising, meeting guests as they arrived and of course celebrating. Friends and family from around the globe always gathered on “The Wall” and enjoyed many beautiful sunsets and long island nights sipping G&Ts and catching up on old times. 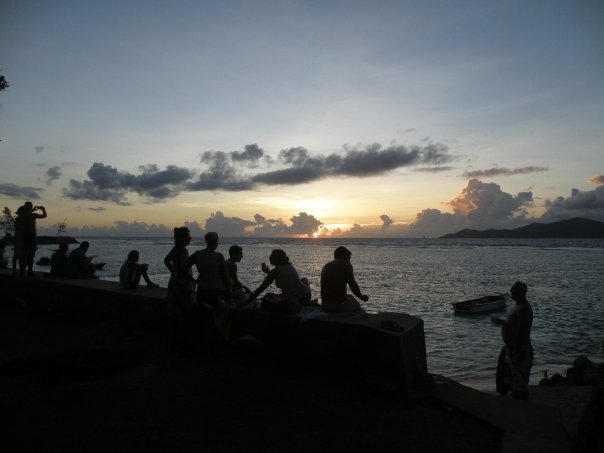 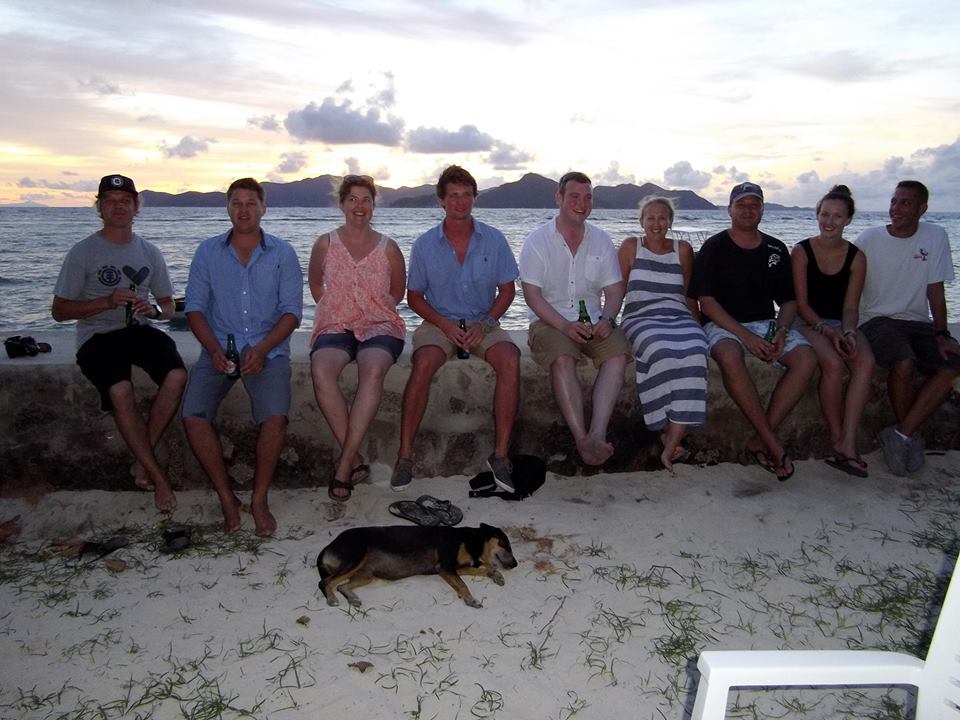 One afternoon (after perhaps one too many sundowners) Poppy “T” McGee appeared and introduced herself to the growing crowd with a frenzied wagging tale. The strays of La Digue are a very clever bunch you see, they know to follow tourists as they are guaranteed pats, cuddles and most importantly FOOD. Poppy was no exception, appearing as if on cue to the delicious smells of a fresh batch of breadfruit chips.

She had obviously just given birth to a litter of puppies and as a result was looking a little tired and worse for wear, so one flash of her big golden eyes saw her showered in tasty treats. So I hear you ask, where did the name Poppy “T” McGee come from? Well the Poppy bit only came recently, back then she was know quite crudely as “Tits McGee” on account of her low-slug appearance (as I said she appeared after quite a lot of Seybrews had been consumed).

Poppy obviously enjoyed our company and became a permanent fixture at the beach house and even followed us as we cycled around the island during our stay. She knew she was on to a good wicket and didn’t dare let us out of her sight (even coming to the church on the day of the wedding). We sadly never did get to meet her puppies, but no doubt they were hidden away warm and safe under a derelict house or boat.

All of our guests (many of whom are now our blog followers) will remember Tits McGee and her big brown eyes as she appeared in many of their holiday snaps and left lasting memories with them all. Quite a few tears were shed when people had to leave La Digue and say goodbye to this beautiful soul at the pier (I know we did). That said we all took comfort knowing that the La Digue strays are unlike most, happy to wander freely amongst the bicycles and always well fed and cuddled by tourists.

Fast forward to August 2015, when Stuart and I visited La Digue for a short stay en route to Europe. We knew we were moving to the Seychelles then and were on a bit of a “recce” to walk the site with our hotel plans. It was on strolling from the port towards the beach house that we bumped into Tits McGee again. She was pregnant at the time and looked completely different (and younger) so we assumed it must have been one of her puppies…. little did we know it was Tits McGee herself! Fast forward again to early 2017, construction of Le Nautique La Digue was well under way but needing some supervision in the finishing stages. Knowing that we were going to be on site a lot, we built a little tin shack on the site for us to stay in. It was far from glamorous but had all the creature comforts we could ask for, private bathroom, comfy beds, A/C, TV, fridge and cooker. It was here, one night while were admiring the sunset on the pool deck that a wet nose touched Jose’s hand. Again we assumed it couldn’t be Miss T, so assumed it was one of her offspring paying us a visit. 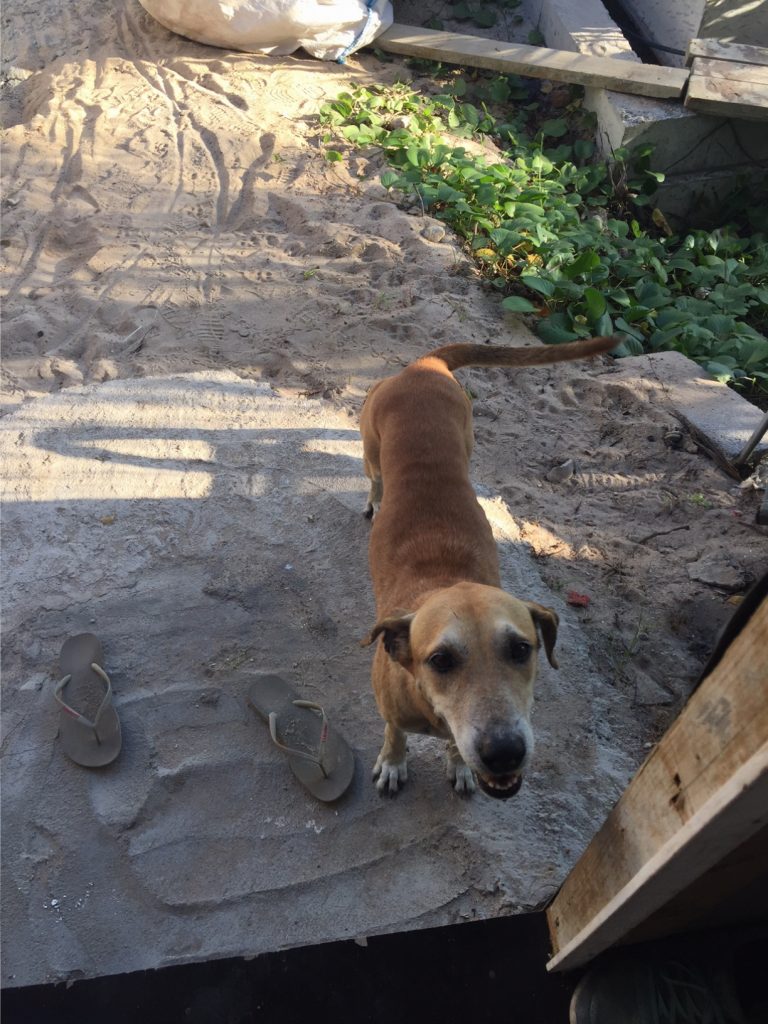 Days turned into weeks and weeks turned into months and the dog we named “Puppy” remained by our side. She slept in the sand outside our shed and enjoyed breakfast, lunch and dinner with us each and every day. Some days she would disappear to join the tourists sunning themselves on the golden sands of Anse Source d’Argent but she would always return. 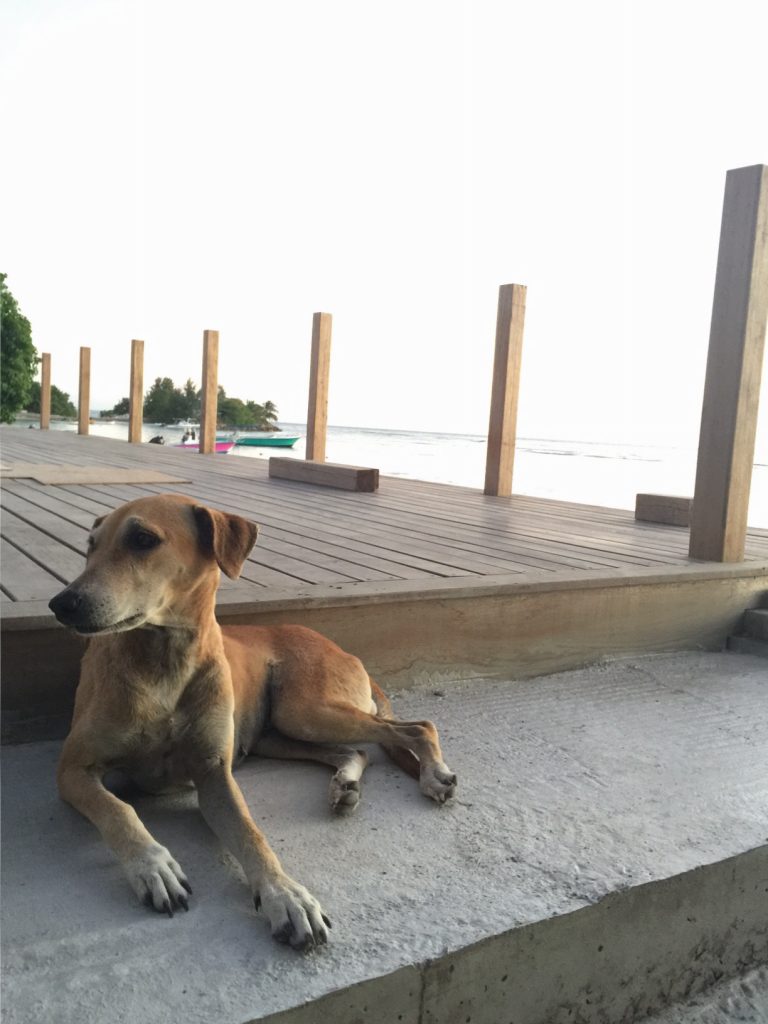 With each passing week we noticed that Puppy (later changed to Poppy) was starting to suffer from a terrible ear infection. Try as we might she would not let us put drops in her ears so we decided it was best to bring her to Mahe for proper vet treatment. With much difficulty we bundled her into a pet carrier, transported her by golf buggy to the port and caught the two ferries to Mahe. That was the end of our troubles…. or so we thought. 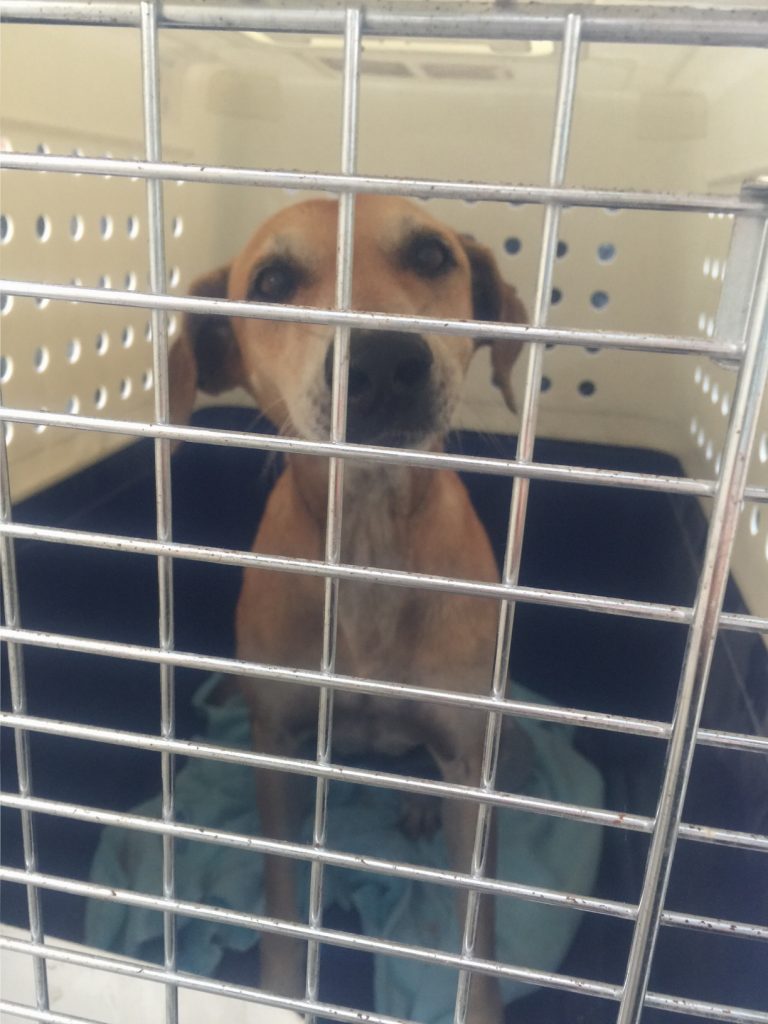 After her initial vet visit with the lovely ladies at Union Vale Vet Station she was due to rest up on site until her next appointment, but “Houdini” had other plans. She escaped her pen (god knows how) and was found some 5 hours later roaming almost 5km away in the north of the island. She gave us all quite a fright.

In short it was decided that she better come home with us to avoid future wanderings and after two weeks and a further 5 vet visits, injections and treatment she is fighting fit and almost ready to head back to La Digue. Just one more week and her yearly injections to go and she can return to her island home that she clearly pines for. So with that in mind we have decided from now on that Poppy “T” McGee will be Le Nautique La Digue’s adopted stray-not-so-stray, guaranteed food, shelter, love and cuddles whenever she wishes, but that she can freely roam the dusty streets of La Digue that she so very much loves. Old brown eyes has so much love to give the visitors of the island that it would be wrong to keep her all for ourselves.

Here are a few happy snaps from her time in Mahe; 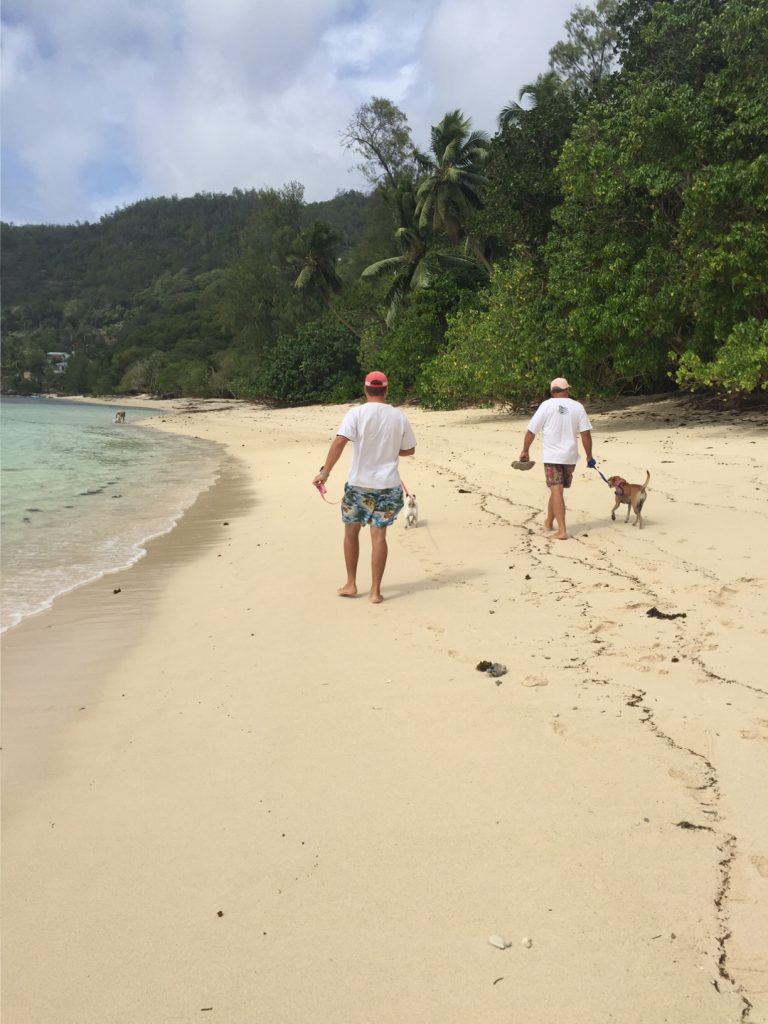 As you can see she is such a beautiful soul and we look forward to many more happy memories with her in the future. Perhaps she will end up in a few of your holiday snaps when you visit the Seychelles?

So there you have it, the life and times of Poppy “T” McGee 🙂